Mafic volcanics consist of pillowed and massive basalts and occur in the NW corner of the Ishkoday North Claim Block.

All of the units are crosscut by a number of mafic massive dykes of at least two generations.

The distribution of the gold and base metal mineralization appear to follow axes of a NE-SW Strain Ellipse in a Simple Shear Deformation Model with the axes depicting the crisscrossing shears containing the known mineralized veins at LAURION’s Ishkoday, whether gold-rich with minor sulphides and sulphide-rich.

The base metal rich polymetallic veins appear to be localized in specific corridors and commonly associated with sericite-chlorite altered shears and magnetite bands, with or without quartz veining.

The presence of abundant sulphides containing zinc (sphalerite) and copper (chalcopyrite) in a number of veins from areas of pyroclastic breccias (“agglomerates”) could potentially indicate the presence of larger sulphide lenses in proximity.

All drilling since the 1980’s provides an indication of the potential at LAURION’s Ishkoday – there are 85 assay interval results over 5 g/t gold with silver, copper and zinc credits from 0.1m to 3.2m interval lengths within the known Target Area.

LAURION’s Ishkoday has hundreds of veins, as attested by detailed mapping from previous operators in the 1980’s and LAURION’s exploration work from 2010 to 2014, and more recent work in 2018.

Current observations strongly suggest major “vein stockworks”, as can be observed at other greenstone belts in the Canadian Shield such as at the Dome, Canadian-Malartic, Detour and Sigma-Lamaque Deposits from the Abitibi Greenstone Belt.

The abundance and proximity of these vein sets/horizons within the Target Area highlights a strong probability of defining near surface bulk metal potential, as well as individual higher gold grade veins that could be developed separately. 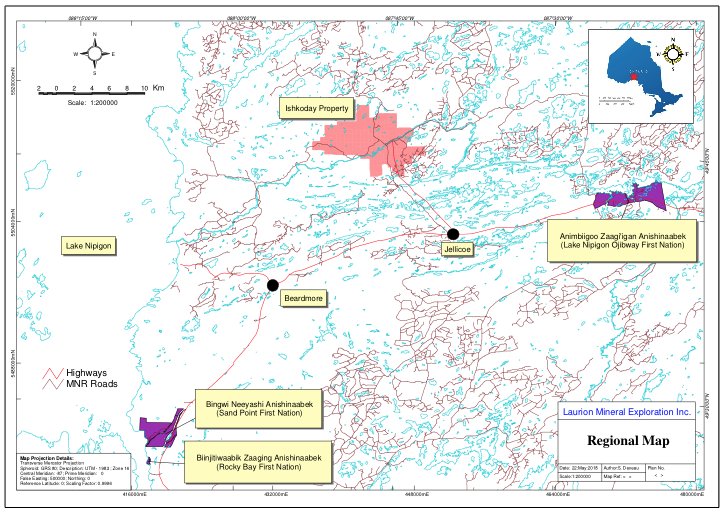